It’s all gone a little bit mad and too PC for my liking these days.

We see it everywhere but for me since becoming a mam to boy/girl twins over the last two and a half years sometimes I feel like running to buy the most over the top sparkliest girly girl dress I can find to compliment the most boyish outfit and announcing to the world just in-case it wasn’t obvious that yes I have a son and a daughter . The dress is for her and the fireman ( whoops sorry firepersons) outfit is for him!

I‘m calling bullshite on Gender neutral everything for kids!

AH sure look the cake was pink & blue 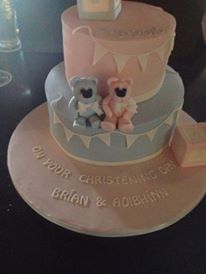 We haven’t raised our kids any differently to each other. Observing them from babies to now is fascinating, herself is more reserved yet bossy, so clever and cute, she is the leader but observes. She is more interested in helping me, loves watching me put makeup on , loves my shoes and dresses. Himself is mad and funny, boisterous, a risk taker, loves climbing with her following him . He is more interested in playing chase, in helping daddy take apart a pc.

They both love cuddles, they both love story time, shes a complete girly girl and hes a million percent typical boy.

Before knowing their sexes I bought turquoise, white and lemon babygros, as soon as they were born the pinks and blues were bought excitedly , I had a boy and a girl and couldn’t wait to dress them as such. It didn’t stop people peeking into the buggy in the early days and cooing over my “two boys” or my two girls ” despite the obvious gender assigned clothing.

As they moved from babygros to outfits I was in my element buying little dresses and cute jeans and tops for the twins, Yes I played dress up and adored every minute of it. In fact I reveled in it although the novetly soon wore off as dressing and undressing two wiggly, refluxey babies is not as fun as plastic dolls that don’t move and you aren’t afraid of hurting whilst doing so.

The first toys bought were multi-coloured, played very annoying music over and over again but kept both babies occupied long enough for coffee and sandwiches to be ate. Dollies and toy cars started to creep in , books of all descriptions were read, trains, buggies, footballs, toy kitchens all were played with in equal measure by both babies.

Sharing is a part of twin life from early on and to this date they will share/fight depending on the mood of the minute with the same toy whether its a pink picnic basket or a football goals game but if my little girl only wanted to play with the Elsa doll and my little boy with the Thomas train forever who am I to force them to choose something more “gender neutral” ?

They both naturally gravitated towards toys that interested them not because something was defined as being a girls toy or a boys toy. In fact my little girl is on par to be a good footballer with a goals game they have whilst her brother loves playing restaurant in the toy kitchen more. Does it bother him that the cash register is pink or her that the goals is typically seen as a boys game, Not a bit !

Both toys were larger purchases for them to share but if I want to buy an Elsa doll for her and a Thomas the train for him I will do and have done and won’t accept that I am somehow going to condition them long-term into specific categories.

Toddlers don’t understand the concept of most things so pardon me if I call BS on a toy train somehow manipulating my little boys mind.

How do we label a “Red Kitchen”

Why are we even obsessing over ensuring that everything we offer to them is seen as an equal and open opportunity for both sexes ?

Why can’t kids just be kids and their parents stop worrying over making the PC world happy rather than their kids ?

Hands up, I will let you in on the fact that herself gets upset if I don’t put a dress on her and I am delighted she loves dresses. I always wanted a girly girl, to put little pigtails in her hair and wear tutus. At the same time if she decided tomorrow it was jeans for the rest of her life so be it, it’s her choice to make no matter what I might prefer and given her strong willed personality I am not the boss here !

I deny anyone to not just sit back and smile if they saw her twirling around singing Let It Go in her pretty dress( her words).

They both love cuddles, they both love story time, shes a complete girly girl and he’s your typical boy. There is nothing wrong in this sentence, they’re kids at the end of the day. The age in we live in now affords anyone the opportunity to do whatever they wish to do, yes prejudice still exists there is no denying this, but it’s up to us as parents in my opinion to give our children the necessary skills and encouragement  and life lessons .

I will raise my children with belief in themselves and their abilities and instill in them a confidence if they want to do something to pursue it with passion, determination and drive , not to place any importance on when they were toddlers and the fact that they played with a pink or blue plastic toy.